An Honor and a Privilege

An Honor and a Privilege

Today I had the honor and privilege to spend several hours on the range with a young woman who Poolie who will ship out to Boot Camp at the Marine Corps Parris Island is a month. She had never touched a rifle, let alone fired one, before today. There was some anxiety in her demeanor. Some doubt in her mind. What would it feel like to shoot a rifle? Would the recoil hurt? How loud was the noise? Could she, would she ever hit that target? I talked and she listened. I drew pictures and she saw. I fired first and she observed. And then she took her turn. At 40 m we found two of her hits on the target, but they were spaced about as far apart on the paper as they could be and still be on the paper! Couldn’t even find evidence of the third shot.. Ah, I said. Do you remember if your eyes were open? In answer her eyes opened very wide! Hmmmm. Maybe not as much as they should have been when she pressed the trigger. But she worked and she listened and she worked some more at it. And soon the concept of holding the rifle as steady as possible while pressing the trigger straight flat back took hold. The holes in the paper got closer and closer together. The recoil and the noise became non-events. And then she learned to correct herself. She learned to stop the trigger press when she felt herself pushing the rifle forward to meet the anticipated recoil and to restart the trigger press in one smooth movement. Take a look at her doing just that on the video. She learned to reset or catch the link of the trigger between shots. Take a look at the circled area on her paper target. Perhaps a smidge low you might say, but not if you know the rifle was previously sighted in for a slightly longer distance that she was working at. Look more at the group and the consistency. The anxiety disappeared. The doubt was lifted. And what recoil and noise? I can’t wait to hear about her rifle training at Boot Camp! 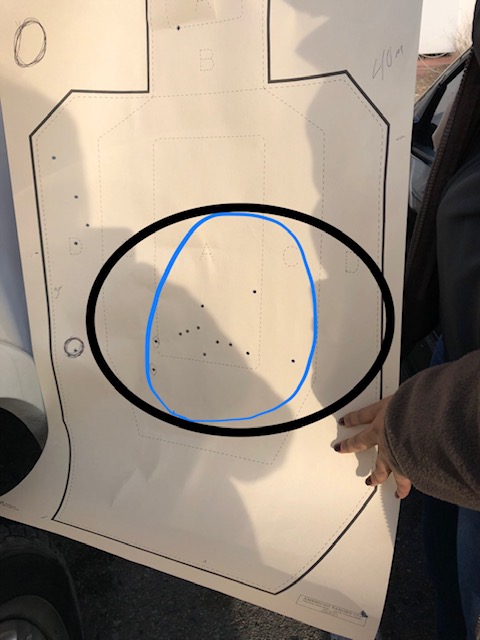